District Grand Prefect Mervyn Wilson greeted over 70 Allied masons from his own district as well as visitors from all over the country when he opened the District meeting.

Its better than zoom he said, as he greeted one and all to the first full meeting back since the pandemic.

Many careful steps had been taken to ensure the safety of all those attending but these were subtle and did not spoil the day in any way.

Attendance was good with all 11 councils represented and the officers of the year present were invested by Mervyn.

It was also a chance for Mervyn to congratulate Peter Hegarty on becoming his Deputy.

Following the post meeting refreshment the brethren enjoyed a meal of Rag Pudding and Lancashire Caviar. (That’s mushy peas by the way!). It was a great chance to catch up and enjoy the company after the long suspensions to our meetings due to the pandemic. Mervyn was warmly toasted and his response was well received. He mentioned some exciting meetings on the way, with the return of Shuttleworth Council in two weeks time as well as team visits to James Edward Glover in October and HBS next year.

The brethren departed with memories of a great meetings and lots of great and exiting things to come!

Published by The Allied Degrees in East Lancashire 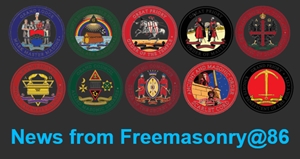